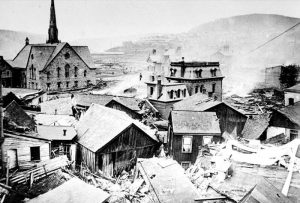 Destruction in Johnstown after the flood

On May 31, 1889, South Fork Dam near Johnstown, Pennsylvania, collapsed, releasing the entire volume of Lake Conemaugh into the valley below. The ensuing disaster, known as the Johnstown Flood, resulted in the deaths of over 2,200 people.

In 1889, around 30,000 people lived in the booming steel mill city of Johnstown, located in a valley so prone to flooding that in the mid-1800s South Fork Dam was built 14 miles upstream on Little Conemaugh River. It was the largest earth dam (made of dirt and rock) in the United States and created Lake Conemaugh, the largest man-made lake of the time. Once part of a canal system, the rise of railroads led to the canals falling into disuse, and maintenance of the dam was neglected.

Events of the Flood

Heavy rain on May 30, 1889, chipped away at the dam’s structural integrity while Lake Conemaugh’s levels steadily rose. When the danger became clear to dam engineers trying to clear the clogged spillways, a rider was sent to evacuate valley residents. Unfortunately, either the warning never reached Johnstown because of downed telegraph lines, or it went unheeded. Most in the valley were used to smaller incidents and took the usual precautions of moving to higher levels in their homes rather than evacuating.

The dam collapsed with a roar at 3:10 p.m. on May 31, sending a 30-foot-high wall of water rushing through the communities of South Fork, Mineral Point, Woodvale, and East Conemaugh. The deluge hit Johnstown at 4:07 p.m., carrying trees, railroad cars, houses, barns, animals, and people with it. Thousands were drowned or crushed, and around 80 survivors clustered on Johnstown Bridge burned to death when the debris that had saved them from the flood caught fire.

2,209 people died in the disaster, and 1,600 homes were destroyed. The recently established American Red Cross, led by Clara Barton, constructed shelters for survivors and organized relief supplies. It took five years for Johnstown to be rebuilt, though it would not be the last deadly flood the city would see.

Learn more about the Johnstown Flood through historical newspapers from our archives. Explore newspaper articles, headlines, images, and other primary sources below.

Articles and Clippings about the Johnstown Flood 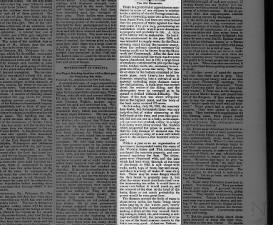 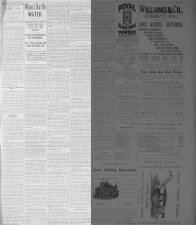 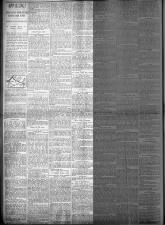 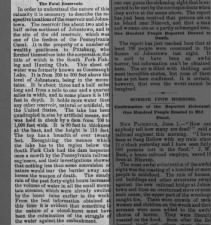 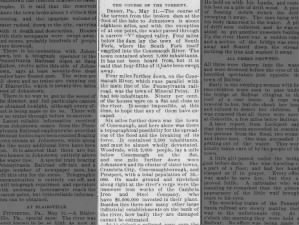 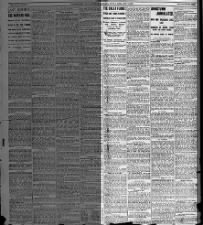 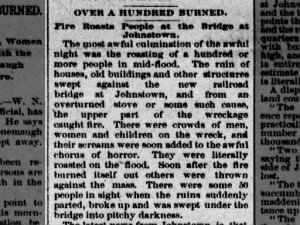 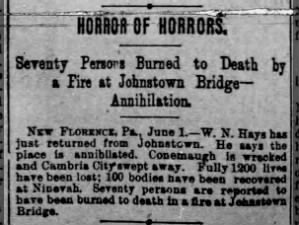 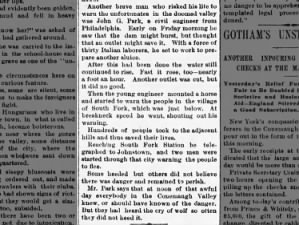 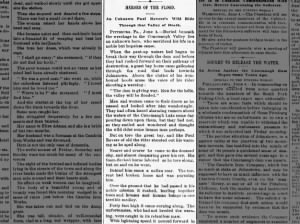 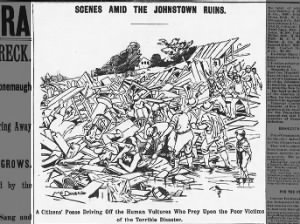 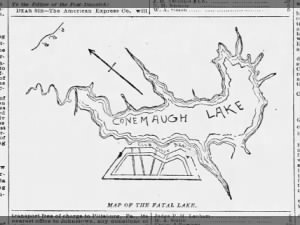 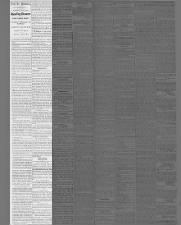 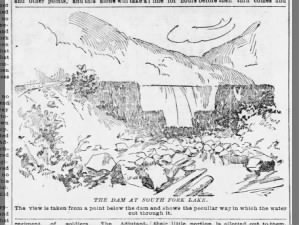 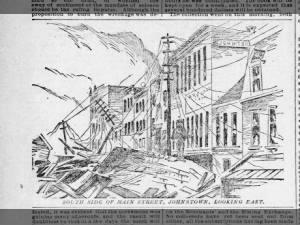 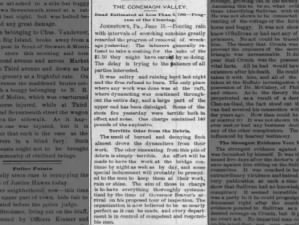 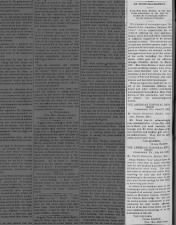 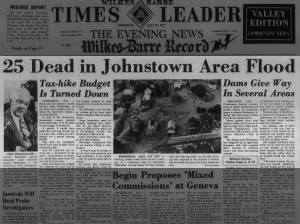